Stepan Sarpaneva of Sarpaneva Watches is the highly talented watchmaker from Finland, is a consummate designer and maker of watches. He takes inspiration from the sky above his Helsinki workshops and demonstrates an empathy with nature, manifest with his various horological creations. Stepan Sarpaneva is, by virtue of his country of origin, unusual. There are not many Finnish watchmakers of his stature, save for his highly talented compatriot, Kari Voutilainen. However, unlike Voutilainen, who is now based in Switzerland, Sarpaneva chooses to craft his watches in Helsinki. However, Stepan is no stranger to Switzerland, studying at the esteemed WOSTEP, Neuchâtel before working for some of the finest purveyors of haute horlogerie, including Christophe Claret, Parmigiani Fleurier, Piaget and Vianney Halter. However, despite spending 10 years working in Switzerland, it was obvious when chatting to the Finnish watchmaker that ‘home is where the heart is’, and that home is Finland.

Over the years, I have seen Stepan exhibiting his timepieces at Baselworld and always felt drawn to his watches which exhibit their own very distinctive style. Indeed, there is a wonderful sense of originality with his masculine creations. He has an incredible prowess for design which some equally talented watchmakers lack.

Part of the appeal of Sarpaneva Watches is they are clearly borne out of an empathy for the nocturnal views above and, indeed, nature at large. Stepan’s fixation with the moon is manifest with a stylised depiction of the heavenly body on many of his watches. Moreover, there is an endearing dose of humour with the moon sporting a human-like face. Indeed, it is this characterful depiction of the moon which featured on the MB&F Moon Machine by Stepan Sarpaneva, a joint venture with the high-end Genevan watch brand.

In 2015, I had the good fortune to place a 42mm rose gold version of Sarpaneva’s ‘KO Northern Lights’ model upon my wrist. As the name suggests inspiration has been taken from the Aurora Borealis, an incredible colourful spectacle, best seen in Scandinavian countries. This natural phenomenon is caused when gaseous particles in the earth’s atmosphere collide with charged particles from the sun’s atmosphere. The collision results in the conversion of energy into light. In this instance, Sarpaneva collaborated with James Thompson of Black Badger Composites. The two Scandinavian gentlemen created a timepiece which delivers a nocturnal appearance like no other. Indeed, the luminescent material, visible via a lattice-like upper dial grille, effervesces with life. Would-be wearers have a choice of brilliant nocturnal hues to choose from, including green, blue and violet.

The automatic watch, powered by a heavily modified Soprod A10 calibre, looks hugely impressive with its scalloped caseband. It sits comfortably on the wrist and brims with a degree of individuality that only a small independent brand can provide.

The Northern Stars watch is said to be inspired by the ‘cruel and ruthless winter’ and the limited illumination granted by the ‘Little Bear’ constellation or ‘Ursa Minor’. The darkest winter nights of Stepan’s native Finland provided the germ of an idea which delightfully grew into a gorgeous timepiece. On the Northern Stars watch, the moon adopts a discreet persona only coming into view twice each day. The lattice-like dial grille or the Northern Lights is supplanted with a gorgeous, deep-black enamel dial crafted by the renown grand feu specialist company, Donzé Cadrans. Examining the dial at close quarters reveals a delightful depth and luscious lustre which proves incredibly beguiling.

Recently, Sarpaneva presented four models, each referencing a season.  The lattice-like dial has, once again, returned but the moon’s cheerful gaze has, in this instance, been omitted. 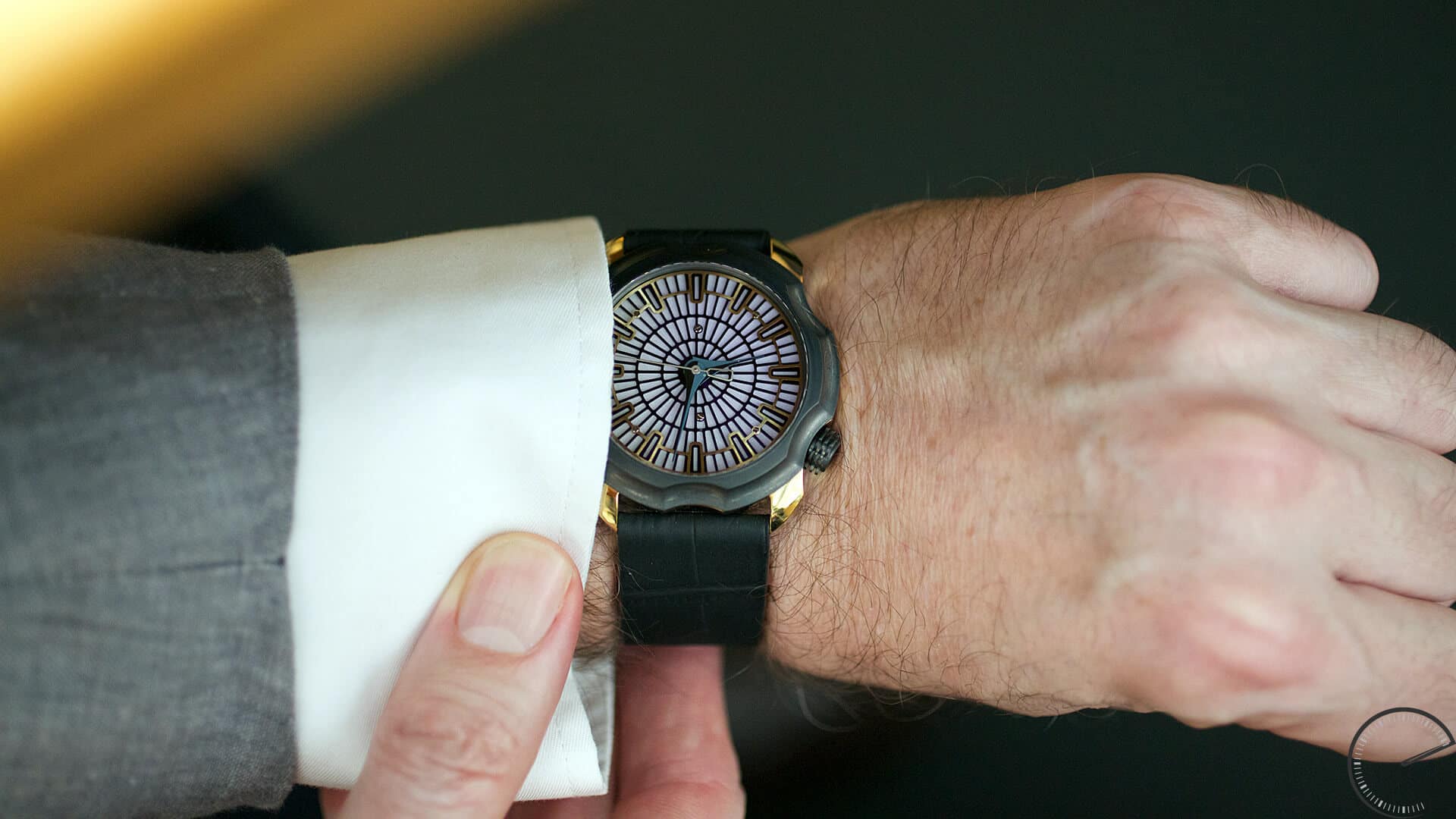 The daytime tones are comparatively soft, muted and understated when compared with some of Sarpaneva’s other models. Again, Stepan returned to James Thompson and suffused each watch with a vibrant nocturnal gleam. Each variant evinces a different nocturnal glow, including green, yellow, violet and blue. All models are softly spoken during daylight hours but at night reveal a startling alter ego, delivering vibrant exhibitionism that could never be overlooked.

Stepan Sarpaneva is an accomplished watchmaker and has worked on very complicated movements for some of the most prestigious practitioners of haute horlogerie. He uses a Soprod A10 movement which he heavily adapts to his own exacting standards.

In my opinion, what distinguishes Sarpaneva as exceptional is his capacity to design unique watches which bear little resemblance to any other timepieces on the market. His dial designs play with both grille-like forms and gorgeous enamel vistas. His Korona case shape is distinctive and eye-catching, yet proves comfortable to wear.

Perhaps, most pertinently, it is Stepan’s empathy with nature and, in particular, the sky above his Helsinki workshop which defines his work. He clearly draws on this environment when conceiving new models. Similar to ‘terroir’ influencing the wine produced by a vineyard, it is Stepan’s choice of location which determines the character of his watches.