Sometimes haute horlogerie can feel a little like a complications arms race with firms competing to see how many functions they can incorporate into one watch. One can almost imagine the meeting rooms, all with splendid views over La Chaux-de-Fonds, as groups of competing watch execs gather around their board tables. “I know,” says one, sipping his morning latté, “Let’s have a dial with an equation of time, deadbeat seconds, a rocket-launcher and a perpetual calendar!” Much murmuring of approval. Then the Marketing Director peers over her pince nez and suggests; “Ah yes, but wouldn’t it be better if we added an astrolabe dial and a working model of the Antikythera mechanism too?”  All this horological cleverness for its own sake can have a knack of making things dial-side a little fussy.

Perhaps it’s a desire to avoid the worst excesses of this ‘complications war’ that has led to Jaquet Droz only recently introducing even the most common of complications, a chronograph, into their Grande Seconde series of watches.  And then doing it so subtly, you’d hardly notice.

It would have been so easy to indulge in a flurry of sub-dials, tachymeters, pulsometers and a major pusherfest. But that’s not really the Jaquet Droz way.  Instead, the Grande Seconde Chronograph is as straight-up simple and elegant as its name. As well as this apparent simplicity of design and considered use of complications, the Grande Seconde watches very much have their own visual identity. They’re based on one of the firm’s eighteenth-century pocket watches, but each watch uses a variation of the Jaquet Droz figure-of-eight dial arrangement.

In each case, the head of the 8 carries the current hours and minutes with the belly displaying a retrograde date on the outer ring and 30-minute chronograph register on the inner ring. The central chrono seconds are looked after by a hand running on a pinion in the overall centre of the dial.

An arrangement like this doesn’t lend itself easily to a chronograph; at least, not without a lot of frippery and fuss, yet Jaquet Droz has successfully avoided either. Rather than slathering subdials all over the place, the chronograph functions – the track of the 30-minute register and the outer chrono seconds track – are simply picked out in blue. Each version of the watch uses the same movement, the calibre 26M5R. This features a 40-hour power-reserve, monopusher, column-wheel and a central-seconds chronograph developed from the Piguet/Blancpain calibre 1185. By employing a column-wheel arrangement, with a vertical clutch, the chrono seconds hand springs straight into action as soon as you depress the pusher with no stuttering or faffing about.

That central chronograph seconds rather messes up the idea of a 360 degree date track on the bottom of the dial, though. Take a look – once the date hand moves just beyond the vertical, it would clash with the chrono seconds pinion. Instead, the Grande Seconde Chrono takes the opportunity to sneak in another complication – a retrograde date display.  There’s no fuss, nothing on the dial to tell you apart from the date track and the hand itself.  No point shouting about these things, is there?  If Jaquet Droz’s designer has a large calibre BMW or a Mercedes parked outside the atelier, you can bet it’s de-badged.

The Grande Seconde may be inspired by a pocket watch from 1784, but the tech in the new cal. 26M5R movement is anything but old-fashioned.

For a start, the hairspring is silicon rather than cut from Nivarox or another proprietary alloy. Although it’s tiny, the hairspring – or balance spring – in a watch controls its heartbeat. Ever since a watchmaker wound the first hairspring from a piece of steel, everyday magnetic fields, fatigue and plain old corrosion have all worked to wreck timekeeping. Silicon does away with them all. It’s impervious to magnetic fields, won’t fatigue and can’t rust. It also requires absolutely no lubrication.

The pallet stones of the movement’s lever – the mechanism that controls the oscillation of the balance through each of its 21,600 vph rotations – are lubricant-free silicon too. That means no oil to dry out and gum up the movement’s arteries. Power gets into the engine’s single barrel (sufficient to run the watch for 40 hours) either by a few twists of the monopusher crown or by the spinning gold winding weight. This is 18ct gold and cut away to the bare minimum, resembling a flat-based rainbow. It also features two stars of the Jaquet Droz logo on the brushed bridge piece near its pivot. Looking through the domed sapphire display back, the reason for the economy of metal is clear – it’s a beauty of a movement.  You get sunburst Côtes de Genève on the jigsaw-piece bridges, radiating out from the balance wheel, anglage and a clear view of that column wheel. It’d be a shame to hide it behind a conventional weight.

The ‘straight-8’, limited edition watch in gold has a white, grand feu enamel dial. Producing layered, complex enamelwork like this is proper dial-making artistry.  It’s also a task only the dedicated bother with. It just takes a fleck of dust, an air bubble or a crack to ruin hours spent building up and separately firing each layer of enamel. Contrasting against the dial, the hands are 18ct red gold for the hours, minutes and seconds with blued steel for the chronograph minutes and seconds.

Taking the ‘less is more’ route, Jaquet Droz has chosen to add a simple red tip to the date hand, echoing the red ‘31’ for the end of the month on the date track and the ‘numerus clausus’ number just before 3 o’clock.  They’re two tiny details but they add a huge quotient of visual interest to the dial. Jaquet Droz is, as usual, sticking to their code and producing just 88 gold Grande Secondes.

The stainless watches aren’t limited. These use a ‘lazy-8’ dial configuration.  That’s because their movements are turned through 30 degrees, shifting the sub-dials. Turning the movement also means the crown shifts round to four o’clock.  Same movement, same watch, but a significantly different look.

The hand-sandblasted dial options carry this theme on, with a choice of grey, steel blue or silver. The stainless watches with a silver dial get blued steel hands, again with that red tip to the date hand. The blue and grey dials get brighter, rhodium-plated hands. There’s no lume to be had on any of the watches on the series, but they’re no poorer for it.

The dials also echo the inspiration of their eighteenth-century forebear by using the Jaquet Droz traditional combination of Arabic and Roman numerals – a sort of proto-California dial some sixty years before the eponymous state was founded. All the numerals are Roman, apart from 5, 6 and 7 at the base of the dial.

These aren’t small watches at 43mm diameter and nearly 15mm in height, although the relatively short lugs make it snug down on a wrist. It’d fit under a shirt cuff – just – but it’s not a watch you’d really want to hide.

Jaquet Droz has managed to hit that elusive balance between making something interesting, different and new and trying a bit too hard to win the complication arms race. There’s significant technology inside the movement, but they’ve resisted the temptation to shout about it by ramming in subdials, extra scales and pushers. Instead, the Grande Complication Seconde Chronograph just quietly, elegantly and understatedly gets on with doing its job and it looks rather lovely while it does it. 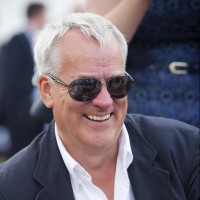 Mark has been obsessed with watches since well before it was socially acceptable. Only deflected from a watchmaking career by the advent of quartz in the 1970s and ‘80s, he has since spent far too many waking hours researching, collecting, reading and writing about watches.