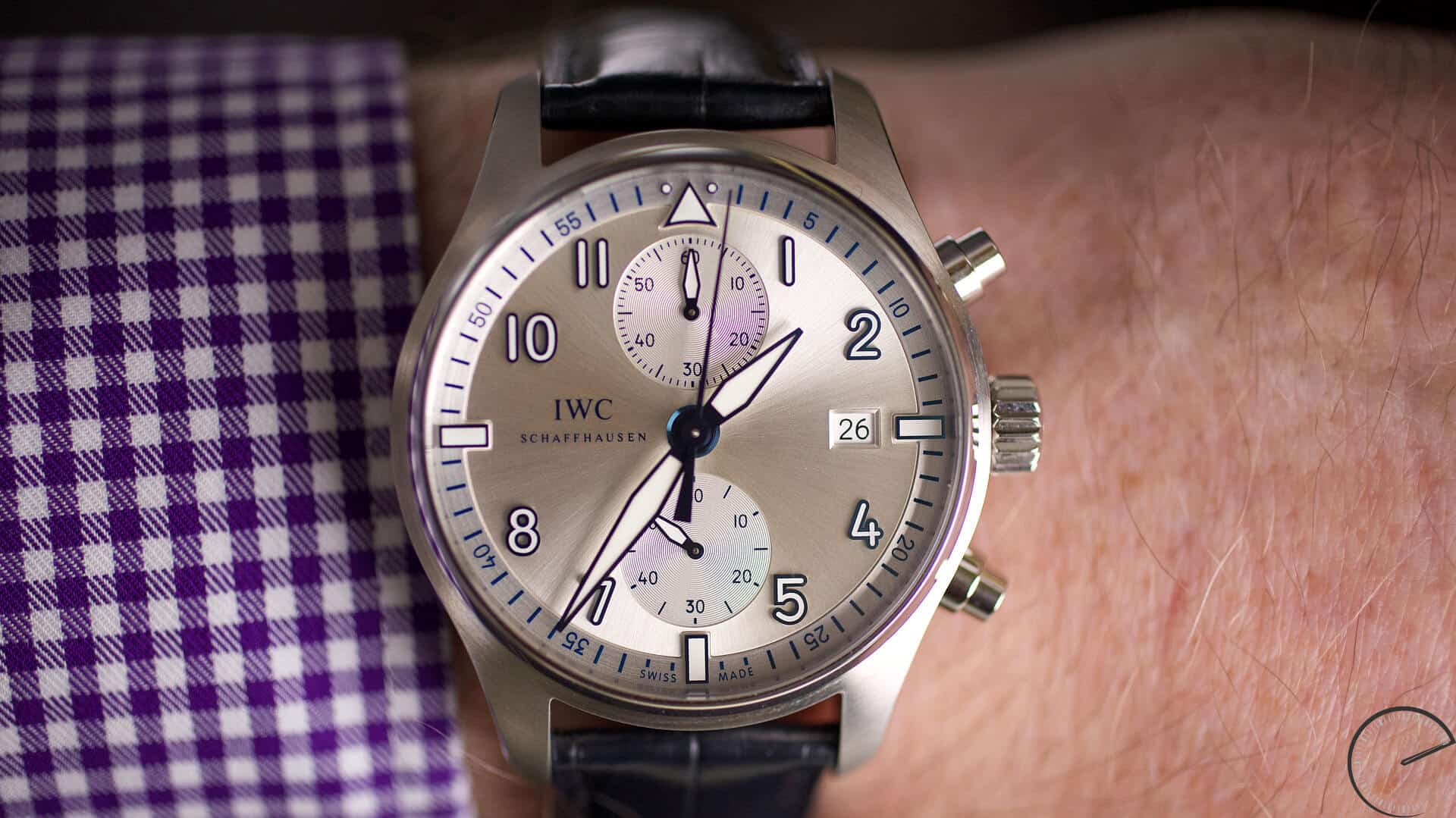 It’s funny what you think of when lying in the bath. Last night, while pondering the meaning of life, with a loofah in hand, my relaxed mind began to wander. I started to think about pilots’ watches and, as much as I tried, I could not think of another brand capable of surpassing the historical ties IWC shares with this genre of watch.

The pilot’s watch, sometimes referred to as a ‘deck watch’, ‘navigation watch’ or ‘observation watch’, is very much part of the IWC paradigm. While the maison was founded in 1868 and commenced crafting exquisite pocket watches from this time, it was 1936 which provided a defining epoch in the brand’s history when it crafted its first pilots’ watch.

This timepiece had highly legible Poire-squelette hands, Arabic numerals denoting the hours, a fluted bezel and supremely crisp chemin de fer encircling the dial. With its anti-magnetic properties it proved the ideal accompaniment for aviators.

The iconic Big Pilot, now a staple of the IWC catalogue, can trace its lineage to the Big Pilot’s Watch 52 T.S.C released in 1940. This military watch, resembling a cockpit instrument was made to criteria stipulated by ‘Das Reichsluftfahrtministerium’ (RLM) and became Luftwaffe issue. The large crown was designed for ease of manipulation with gloved hands. The hacking seconds facility allowed pilots to synchronise their timepieces with a reference clock. The movement was shrouded in a soft iron core, conferring anti-magnetic properties, and the watch was capable of working at extreme temperatures. Perhaps, most notably of all, the Big Pilot’s Watch 52 T.S.C was an exemplar of lucidity with its large numerals, prominent hands and clear concise markings populating the periphery of its dial.

The Royal Air Force (R.A.F) issued the Mark 11 watch to its pilots and the model continued in service for over 30 years.

My rationale for imparting this information is to demonstrate that there is legitimacy to IWC’s array of pilots’ watches.

Historically, wearers of an IWC pilot’s watch will have sought a covert existence, moving surreptitiously in the still of the night and dodging the searing stare of the enemy’s searchlights. However, the Swiss watch brand from the canton of Schaffhausen, recently partnered with the British Film Institute (BFI), an organisation which seeks to create a ‘flourishing film environment in which innovation, opportunity and creativity can thrive’. IWC has been working with the BFI since 2014 and has committed to this working relationship until 2019. Each year, a shortlist of filmmakers is compiled and ultimately a fortunate winner is selected, receiving a substantial bursary. Since starting its relationship with the BFI, each year IWC Schaffhausen has created a limited edition timepiece. This year’s BFI-themed model is based on the IWC Pilot’s Watch Chronograph Spitfire. Delivered in silver, the dial features a sunray brush motif originating from its centre. I have not found any information to validate my theory, but I suspect the hue of the dial is a nod to the silver screen. It exhibits a gentle, softly spoken tone which provides a perfect foil for the hands and numerals to impart meaning to glorious effect. White B-Uhr hands, similar to the 1940 52 T.S.C, are edged with a slither of blue. The plump, white Arabic numerals again feature a smidgen of blue on their extremities. The white triangular index at noon includes two dots either side of its form, doffing its hat to the watch company’s earlier deck watches.

The bi-compax layout exhibits a delightful balance with the two snailed subdials arranged on a north-south axis. The upper subdial is a 60-minute chronograph register, while below is a small seconds display endowed with a hacking seconds facility.

The 43mm stainless steel case is a superb size, suiting a broad array of wrist sizes. With a thickness of 15.5mm, this case delivers a measured amount of testosterone, making it an unashamedly masculine watch.

IWC has expertly blended satin brushed and highly polished surfaces. The bezel, pushpieces, crown and caseback all gleam resplendently. Conversely, the upper surfaces of the case, adjacent the bezel, together with the caseband, temper the exuberance of the aforementioned sparkling metalwork. Indeed, this blend of surface treatments delivers a harmonious whole. IWC has equipped this model with an engraved caseback, stylishly adorned with the ‘BFI’ logo. The blue alligator strap provides a sumptuous complement to this pilot’s watch. The IWC-manufactured calibre 89365 was first released in 2012 and has proved a reliable performer ever since. The self-winding movement contains 35 jewels and is able to provide 68 hours of autonomous operation. The balance has a frequency of 28,800 vph (4 Hz) and the movement features a flyback function, proving ideal for timing consecutive events.

Similar to an accomplished actor, IWC has proved to be a consummate performer, successfully delivering an array of roles. The Portugieser, Aquatimer, Portofino and Ingenieur collections all contain very impressive models. However, it is the pilot’s watch which will always be an Oscar winning performance in my opinion.