Many moons ago, I co-owned a chemical company. My business partner was a chemistry graduate and a talented soul who skilfully blended ingredients in order to achieve a synergistic outcome. Raw materials were selected which would successfully mix together to form a blend, producing an outcome greater than the sum of its parts. We often explained this process by saying ‘1 + 1 = 3’.

While visiting some of the factories we supplied, I often smiled as some employees chose to play at being a chemist, despite not having the necessary skills. Sometimes, the consequence of their meddling led to the creation of a brightly coloured liquid, lacking efficacy and delivering little user benefit. Often we would counsel caution and, once again, adopted a mathematical means of expression to impart the probable outcome of this foolishness i.e. ‘1+1=0’.

On some occasions, mixing chemicals had potentially grave consequences. For instance, blending acidic and alkaline liquids sometimes led to the liberation of hazardous gases with individuals talking of coughing or being overcome with fumes.

My reason for this brief sojourn into the world of chemistry is to illustrate that, despite using suitable components, a satisfactory end result is not necessarily a certainty. A watch brand may procure the finest array of parts from various sources, but it is how these parts are brought together which determines success or failure.

An enjoyable afternoon with Fabergé

Recently, I spent an enjoyable afternoon with Fabergé, admiring its many paragons of fine watchmaking. This maison has been crafting some incredible watches of late, including the Visionnaire 1, featuring a flying tourbillon created by Audemars Piguet Renaud and Papi, and the Visionnaire DTZ, equipped with an exclusive movement from Agenhor Manufacture. 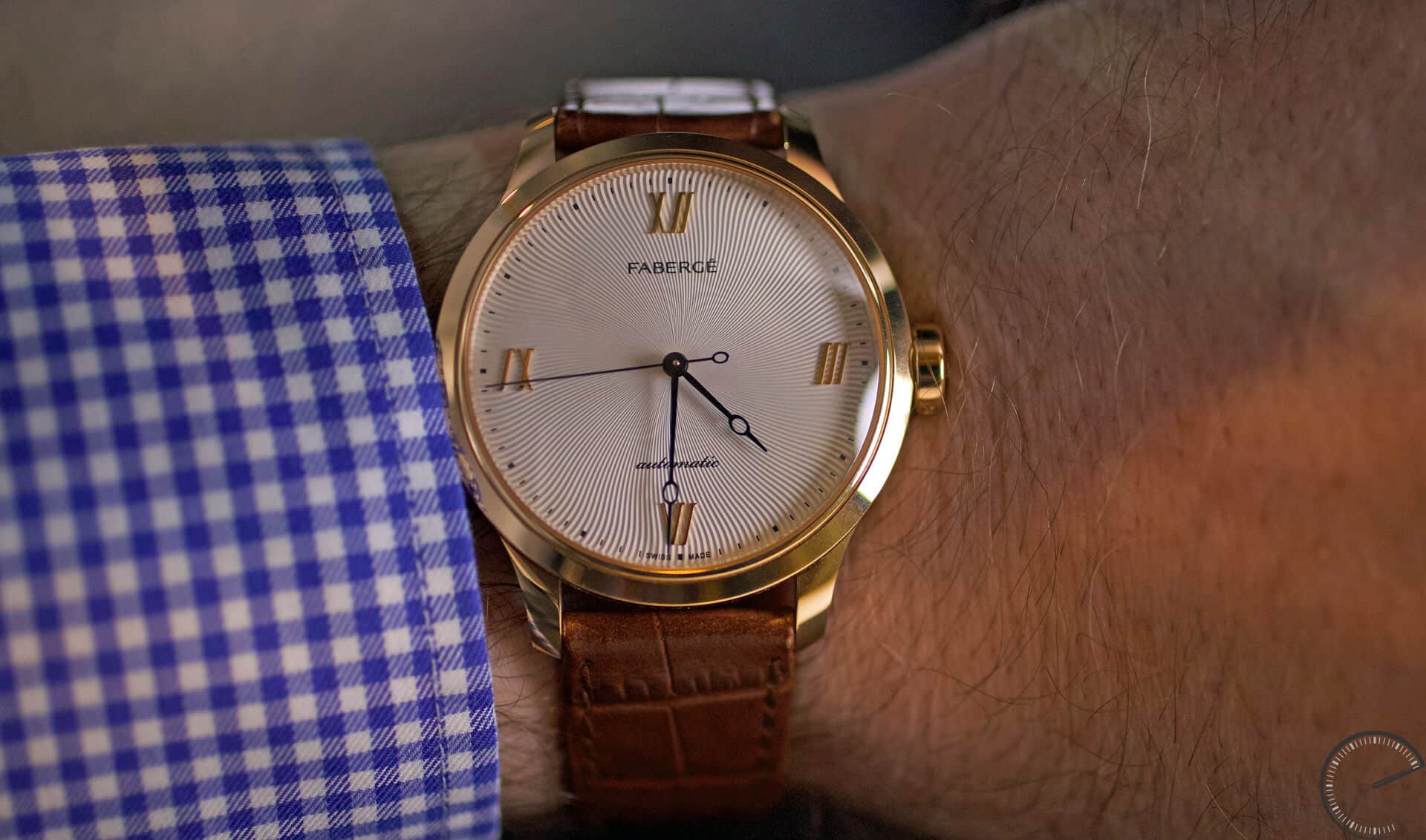 However, whilst it is my intention to review both of these watches in due course, it is actually a comparatively simple timepiece which was the focal point of my stare. The Fabergé Altruist eschews mechanical complexity, featuring a self-winding movement and displaying hours, minutes and central sweep seconds. Nevertheless, despite its simplicity, close inspection of this watch reveals a myriad of smile-inducing moments. Moreover, whilst Fabergé has called upon the help of others for some of its components, the company has successfully brought together parts to a splendiferous conclusion. Allow me to explain further.

The Fabergé Altruist is offered in two variants. The 18-carat white gold version of the timepiece is the most exuberant version, endowed with a captivating blue dial consisting of a guilloché motif suffused with a lustrous blue grand feu enamel. The shade of blue is incredibly deep, exhibiting a wonderful degree of luminosity and a notable three dimensional allure. The second version, presented in 18-carat rose gold, looks much more restrained than its blue-eyed brother. The dial is, once again, adorned with a guilloché motif but shuns the grand feu enamelling, assuming a more muted air. While I adore grand feu enamel dials, in this instance, I prefer the appearance of the 18-carat rose gold version of the Fabergé Altruist. Also, the absence of the grand feu enamel, an incredibly time-consuming process, provides a useful cost saving, reflected in the final asking price of the timepiece.

The blued hour and minute hands, at first glance, resemble Breguet hands. However, look closely at the circular apertures normally found on Breguet hands, in this instance they are actually elliptical in form, resembling the outline of an egg, a shape popularised by Peter Carl Fabergé. Applied Roman numerals feature at 3, 6, 9 o’clock and noon. They employ a delightful, stylish font which effervesces with tasteful originality. Indeed, Fabergé deftly illustrates that individuality can be achieved without employing gauche design. Positioned between the Roman numerals are a series of small squares, indicating the hours, and neat strokes denoting each minute.

Returning to the guilloché dial motif, the series of meandering wave-like lines, emanating from the centre of the dial, delivers much visual interest. The pattern is refined without marring the legibility of the dial.

The 41mm 18-carat rose gold case has a svelte profile, proffering a becoming aesthetic. I found its proportions conferred a pleasing fit. The lugs do not sharply taper downwards, but gently arc just beyond the caseband. This design aspect could have been an issue on a much larger case but, owing to the relatively modest size of the Fabergé Altruist, the lugs do not protrude and assume discreet residence upon the arm.

Gloriously gleaming golden flanks can be found on the angled bezel and upper edges of the lugs. They introduce a judiciously considered soupçon of vivacity to the case. The vertical flanks of the case are satin brushed, providing a charming contradistinction to the adjacent exuberance. At the junction between the bezel and the caseband, a slender band of fluting provides a seemly means of delineation. The caseback, featuring a sapphire crystal at its centre, successfully pairs both polished and satin-brushed surfaces. Fabergé is clearly no stranger to style and repeatedly reveals its design prowess with exquisite episodes of aesthetic delight. The crown is a fascinating design. A stirrup-like ‘pivoting finger-grip’ is affixed to the crown at its widest point. Teasing the finger-grip from its vertical resting position, allows easier manipulation when turing the crown and energising the movement. While, in reality, the functional gains of the crown design are minimal, it does accord a flourish of sumptuous style that I adore.

Fabergé is very honest regarding the provenance of the self-winding movement powering the Fabergé Altruist 18-carat rose gold. The automatic calibre is made by Vaucher Manufacture, the Swiss movement specialist based in Fleurier. I have toured the impressive Vaucher Manufacture facilities and witnessed first-hand the company’s incredible watchmaking competence. Be under no illusion, this company crafts some of the finest serially produced movements available.

The movement contains 28 jewels and the frequency of the balance is 28,800 vph (4Hz). The slender movement, measuring 3.9mm in thickness is equipped with twin barrels, delivering a power reserve of 50 hours. The 22-carat gold oscillating mass has been personalised for Fabergé, sporting its prestigious nomenclature adjacent a fan-like motif. Beyond the oscillating mass, Côtes de Genève rayonnates and circular grained wheels grant a visual spectacle which will cheer any purist’s heart.

The oscillating mass is mounted on ceramic ball bearings, readily capturing the slightest movement of the wearer’s wrist.

The Fabergé Altruist 18-carat rose gold is an achingly gorgeous timepiece which deserves to be admired. Nevertheless, practicality is not sacrificed on the altar of beauty with the dial proving very simple to read.

Beyond the dial, with its glorious guilloché motif, is a magnificently executed case. It exhibits a reserved persona and, in my opinion, is no worse for it. The crown is a delicious morsel of playfulness that endears me to the watch even more.

My only criticism of the Fabergé Altruist 18-carat rose gold relates to the cambered sapphire crystal front of house. While it augments the sense of dial depths to eye-catching effect and does nothing to inhibit ease of read-off, it makes this watch the most problematic to photograph. Indeed, despite taking lots of photographs I left Fabergé feeling I had failed to adequately capture the Altruist’s profound good looks.

At the heart of the Fabergé Altruist 18-carat rose gold is a superb movement from Vaucher, imbued with an impressive specification and admirable level of finishing.

Bearing in mind this historic maison once fulfilled the requirements of the Russian Imperial Court, I am surprised at the relatively modest price of the Fabergé Altruist. The 18-carat rose gold version is offered at $15,000 (RRP as at 25.8.2016), while the 18-carat white gold version, featuring grand feu enamelling, retails for $ 21,000.

Fabergé has sourced numerous components from various industry experts in order to create the Altruist. However, where it has triumphed is by successfully combining materials and skills to deliver a synergistically impressive outcome. Indeed, Fabergé has wonderfully illustrated that with judicious care and wisdom, it can create a timepiece that is truly greater than the sum of its parts.