The Arnold & Son TE8 Ref.1SJAR.G01A.C112A  is a limited edition tourbillon with an inverted movement. It features a prominent barrel bridge which seduces onlookers with its fantastic wave decoration and relatively high dial position. Like many teenage boys, I was always fascinated to watch cars travel along a busy motorway while perched on the bridge above. Standing on a bridge one’s eyes play with perspective and manipulate the depths presented.

Arnold & Son, the haute horlogerie brand based in La Chaux-de-Fonds, has skilfully crafted a timepiece with a prominent barrel bridge presented front of house. The bridge has a ‘¾ wave-form cut-out shape’ and sits on high, looking down on the tourbillon escapement residing below. It is this masterful manipulation of depths which makes this watch fascinating to behold. However, after a short period of association, an array of other attributes also became apparent.

The ‘Modern’ hour and minute hands are faceted, featuring one polished side and one satin-finished side. The contradistinction between the two finishes augments interest while granting a harmonious co-existence. The faceted character of the hands ensures that for the majority of time at least a portion of each hands is visible, save for absolute darkness, when an absence of luminous material renders them invisible. 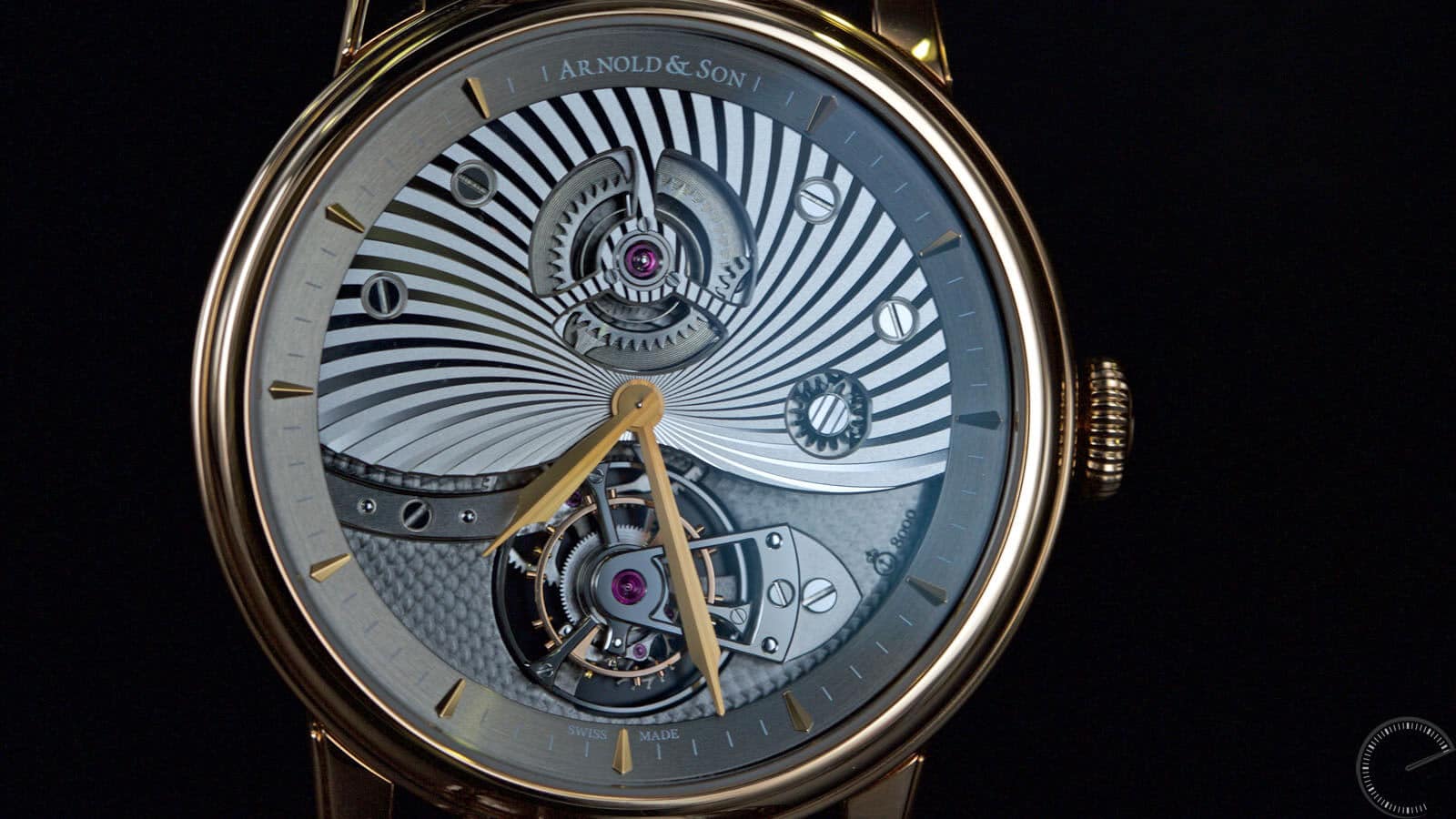 Nevertheless, the absence of luminous material should not be viewed as a criticism, as this is most definitely a formal watch rather than an everyday sports model. To employ luminescent fill would result in an excessive degree of flamboyance which would seem a tad vulgar. Indeed, once again, Arnold & Son has exercised tasteful wisdom by eschewing luminescent treatment.

Diamond-polished golden indexes adorn the chapter ring and punctuate the hours with stylish and seemly aplomb. The aforementioned barrel bridge, adorned with a ‘¾ wave-form cut-out shape’, ensnares the eyes and demands to be noticed. It is beautiful. Its prepossessing appearance is enchanting with each wave-like groove toying with light to spellbinding effect. At the heart of the barrel bridge is a ratchet wheel sporting wolf-teeth, designed to enhance power transmission, and an open-worked barrel.

Residing beneath the barrel bridge is a tourbillon cage. It is equipped with three mirror-polished and chamfered arms, the product of an artisan’s deft use of hand. The asymmetrical tourbillon bridge is  triangular in form, again mirror-polished and chamfered by hand and, courtesy of its open-worked design reveals much of the screwed balance wheel oscillating to and fro. The tourbillon floats above a canvas adorned with petit perlage.

There is a becoming sense of symmetry with the Arnold & Son TE8, courtesy of the arrangement of the barrel and tourbillon along a north-south axis. Moreover, the positioning and scale of these two elements forms a figure of eight, hence the suffix ‘8’ at the end of the nomenclature. Incidentally, ‘TE’ stands for ‘tourbillon escapement’.

Wherever you choose to look, Arnold & Son has exercised tasteful judgement while ensuring ease of read-off. This timepiece delivers a magnificently handsome face for the delectation of purists.

Considering the technical complexity of the Arnold & Son TE8, the 18-carat red gold case measures a mere 44mm in diameter. Owing to its relatively modest dimensions, the TE8 assumes a very comfortable position on the wrist and does not unduly impose its presence upon the arm.

Arnold & Son never seems to opt for expedience and the case of this model perfectly illustrates this philosophy. While a straight sided case would be easier to produce, the caseband of the TE8 is curving, necessitating involved fabrication. Moreover, both the bezel and caseback are ‘double-stepped’, again increasing the number of man-hours needed to bring to fruition. The outcome of this protracted endeavour justifies the effort expended. The lugs, similar to those fitted to some other Arnold & Son watches, feature a satin brushed insert on their vertical flanks. These can be removed to facilitate refurbishment at a later date. The idea sounds simple but often the best ideas are. Typical of a high-end timepiece, the Arnold & Son TE8 is equipped with an exhibition caseback to grant curious eyes a sight of the finely finished movement.

The hand-wound Manufacture movement A&S8000 features 19 jewels and has an impressive power reserve of 80 hours. The frequency of the balance is 21,600 vph (3Hz) and the movement is set to five positions. Arnold & Son seems to enjoy challenging convention. The movement is ‘inverted’ with the ratchet wheel and other interesting elements presented dial side when normally they would be hidden from view. Similarly, the setting mechanism which normally resides dial-side of the calibre is located to the rear of the movement. Moreover, the setting mechanism is incredibly neat and compact and sits adjacent a sea of perlage.

The bridge and wheels are satin-finished with hand chamfered and polished edges. The finissage is top-drawer and worthy of comparison with other paragons of haute horlogerie.

Naughty school children will sometimes copy the work of their peers, adding little value in the process. Likewise, some watch companies plagiarise the designs of their competitors and produce models wholly lacking in originality. No such allegations could be levelled at Arnold & Son and its veritably innovative TE8 model.

The Arnold & Son TE8 transcends the prerequisite of imparting time with glorious detailing and exalted finishing. The movement is crafted to an incredible standard and the symmetry accorded with the dial layout is truly spectacular.

However, where the design of the Arnold & Son TE8 reaches dizzying heights few other watches ever attain is by wonderfully exploiting depths. The relative position of the barrel bridge adjacent the tourbillon below confers a sublime view like no other and bestows a dialscape I could never tire of admiring. Indeed, there is no substitute for viewing an area from a bridge on high and absorbing the view presented.