Meehna Goldsmith discusses the Andreas Strehler Lune Exacte. This timepiece is equipped with “the world’s most precise moon indication” and is currently shortlisted for the GPHG 2016 “Calendar” prize. 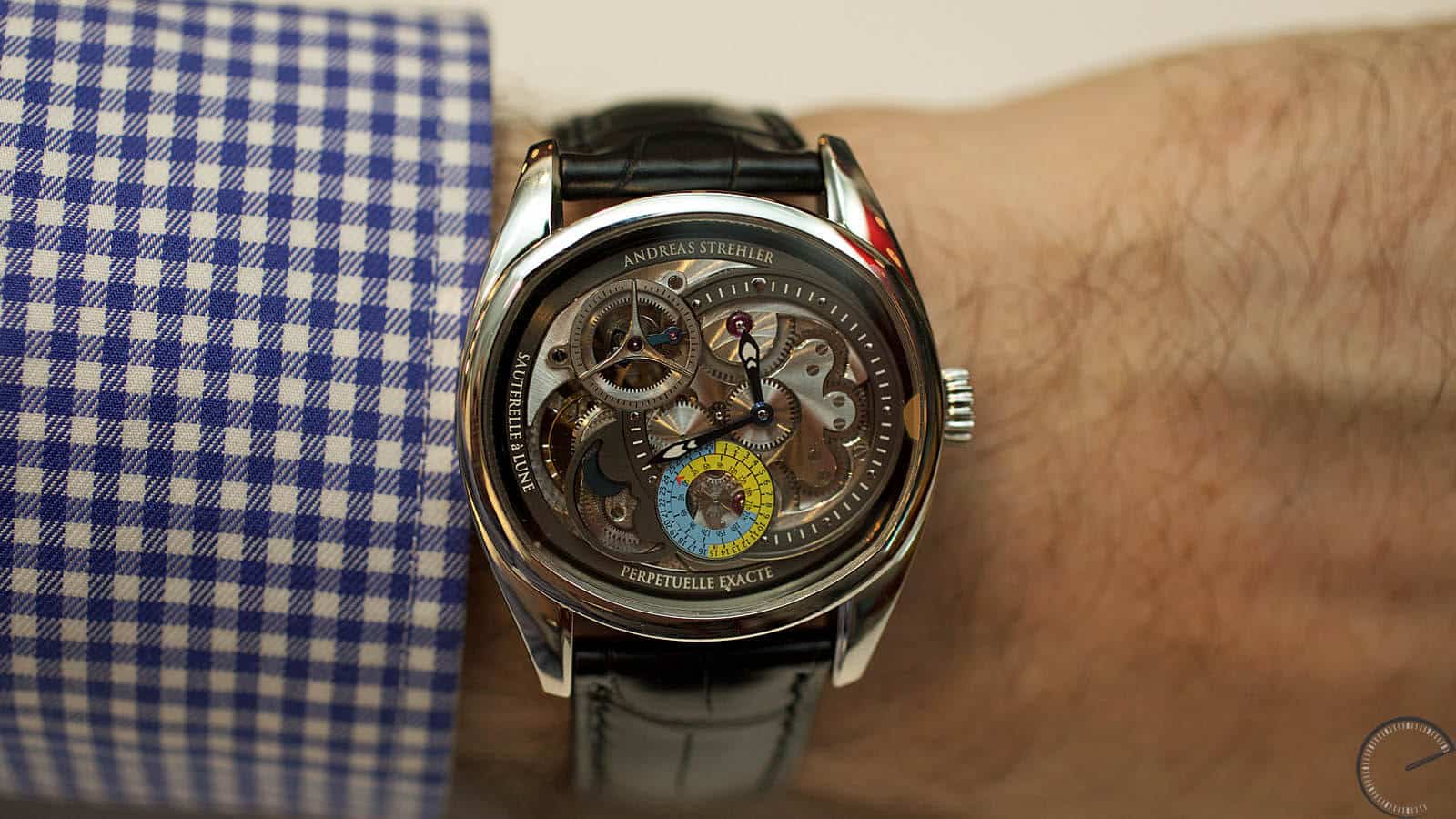 Here we have a humdinger of a watch, without a doubt. It’s to be expected, because, after all, we’re talking about a timepiece by Andreas Strehler. The reverse of the Andreas Strehler Lune Exacte

Although his name might be relatively unknown even to self-professed watch people, Strehler isn’t coming out of nowhere. He’s a quiet, unassuming guy who never fails to surprise with knockout ideas, and not just ideas—those are a dime a dozen—but with the execution to prove their merit. He’s responsible for some of the most magnificent and technically accomplished watches, such as Harry Winston Opus 7, Maitre de Temps Chapter 3 Reveal and Moser Perpetual 1. Plus, he’s got a filing cabinet full of patents (some more insight on that later). Before launching into the brain-bending Lune Exacte, we need to take a step back to the Sauterelle à Lune Perpétuelle 2M.  A lot of bragging rights are thrown around in the category of moonphase accuracy, ranging from hundreds to thousands of years with a day’s deviation. Strehler dispensed with such “inaccurate” indications and created the Sauterelle à Lune Perpétuelle 2M moonphase watch, a Guinness Book of World Record Holder, which deviates a single day in 2,060,757 years—assuming someone keeps the spring barrel wound for over two million years. (Might I suggest a baton handoff written into each successive winder’s will?) The closest contender can “only” claim 14,000 years. Still impressive. Strehler loves a good puzzle and, with the Lune Exacte, he’s out puzzled the entire history of horology twice over: first with the staggering accuracy of a moonphase over a couple millennia, but then he pushed further. Why settle for accuracy to a day, which is sort of theoretical since you can’t really determine it on the indication? As the name suggests, the Lune Exacte takes on the moonphase complication exactly. Rather, more exactly. Strehler figured out how a mortal being could determine where precisely the moon was in its phase accurate to not only a day but within 3 hours! And, you could say so with confidence to an astronomer. The Lune Exacte does this with a conventional moonphase and patent pending Moon Vernier scale situated at 6 o’clock on the dial side of the watch. The Vernier scale uses one red arrow to show the age of the moon in days and two red arrows point out the new and full moon. For those not familiar with a Vernier scale, me included until now, it’s a way to read increments in between two marks on a scale. The Lune Exacte Moon Vernier scale can be a tricky little bugger to get a bead on until you know you’re way around, so Strehler conveniently provides a very simple diagram of explanation. You’ll get up and running fast so you can add it to your cocktail conversation arsenal.

Moreover, the Lune Exacte isn’t a huge hassle to set. Ever wonder why the moonphase of 99% of watches isn’t correct? Because you can only calculate the position from the new moon and full moon. This entails looking up a moon chart and then doing a merry-go-round of crown turns to get to the full or new moon to begin the proceedings.

And here we circle back to his magical filing cabinet of invention. The Lune Exacte contains his patented remontoir d’égalité, first taking a bow in the Sauterelle timepiece. Even when you translate it into English, the constant force escapement might need a quick explanation. For a conventional execution, the constant force springs against the escape-wheel so it receives a “constant force” and not the waxing and waning energy of the spring barrel. But… this is the point in the movement where the least torque is present. We’re talking about Strehler, so to up the ante further on accuracy, he attached the mechanism to the seconds wheel. Every second you can see the satellite gear give the same amount of energy to the seconds and its resultant dead-beat tick on the dial—and not the sweeping motion. Accomplished by the star-shaped satellite wheel, the energy is released to the balance wheel. It probably won’t be surprising at this point to point out this design of the wheels is a first done in a wristwatch. To further delve into why this solution is remarkable and not just a party trick, the whole escapement swings free from vacillating impulses from the remontoir d’égalité. While the conventional constant force escapement is technically limited to a frequency of 18,000 A/h, Strehler’s remontoir d’égalité can be regulated to any higher speed, increasing precision; in this case he chose 21,600 A/h.

Significance of the Advancement?

I hate to be a be a buzzkill, but does anyone truly care if the moonphase is exact—and if they can say to their friends and colleagues, “Did you know the moon is 8 days and 3 hours old today?” Unlike the date, which has relevance to our everyday lives, the moonphase is a vanity complication, unless you’re in the astronomy biz. But that’s not the point, is it? The Lune Exacte is a mental and technical tour de force. The Swiss are obsessed with accuracy and Strehler blew it out with this watch. Andreas Strehler in his workshop

I’m going to throw down and predict the watch wins the Grand Prix d’Horlogerie de Genève in its “Calendar” category, competing against 13 other accomplished watches. And yet, the modest Strehler, when asked for his reaction to the nomination, said, “Even after more than twenty years in the business of making my own watches, the GPHG is still exciting. You see so many excellent pieces. Every one of them deserves to win.”

The Lune Exacte certainly gives me reason enough to howl at the moon. And, I’ll know exactly when the time is right too.